The visit to the first Energiesprong construction site in Germany was very crowded: in Hameln, Lower Saxony, experts from the housing and the building industries experienced how the prefabricated façades could be placed into position on site within just a few minutes.

Symposium on the first Energiesprong renovation in Germany

150 experts from the housing, construction and political sectors visited the first Energiesprong construction site in Germany at the NetZero symposium in Hameln on 9 December 2019.

In Hameln, the housing company Arsago Group has begun regenerating an unrenovated apartment building from the 1930s with 12 apartments using the Energiesprong concept. “We are testing serial refurbishment here because we want to combine energy-efficient refurbishment with low rents,” explained Florian Schrage, Asset Manager of the Arsago Group.

On the construction site, a complete façade was positioned within a few minutes: the insulation, windows, electrics and ventilation ducts, as well as the external wooden cladding were already installed in the wall, which measures around three by four metres, and all that remained to do was to place them in front of the old façade on site. A solar system will later be installed on the roof to cover the electricity requirements of a heat pump. The building will then produce enough energy to cover its own electricity and heat requirements.

The first industrial and CO2-neutral building refurbishment in Germany

“The Energiesprong pilot project in Hameln is a milestone in the practical implementation of the energy revolution in buildings,” said Andreas Kuhlmann, Chairman of Dena’s Management Board.

The prototype for the refurbishment is an apartment building in the Kuckuck quarter, an area which the City of Hameln places great importance on regenerating. The houses are old, the district had a bad image and the vacancy rate was at 80%. The Arsago Group acquired the buildings in 2017. Since then the rubbish on the district’s streets has disappeared and the vacancy rate has fallen to 20%. The press now reports differently on the small district: the narrative has gone from the “Stigma of Kuckuck” to the “Incredible Opportunity for Kuckuck”. In order to make the quarter attractive for new groups of tenants in the long term, the houses are now to be renovated in terms of energy, as well as externally.

This is especially difficult for houses with low rents such as those in the Kuckuck area. The main contractor in Hameln is Ecoworks GmbH, a “hybrid construction company and energy supplier” that has taken up the cause of “CO2-neutral living for all” and which cooperates with established construction technology companies. The company Opitz Holzbau from Neuruppin (Brandenburg), a subsidiary of the building materials company Knauf, is responsible for pre-assembling the façades. The solar systems, heating technology and heat pumps are supplied by established manufacturers. Ecoworks plans and monitors the refurbishment work and then operates the heating system as the contractor for a guaranteed period of 15 years.

The project in Kuckuck in Hameln shows that Energiesprong is also technically and legally feasible in Germany. For the pilot project extensive promotional activities took place and support was received from European, federal and local funds. Ecoworks promises potential cost savings of 20-30% compared to conventional renovations, with “dramatically shorter planning and implementation times” than usual.

“The large crowd at the Energiesprong construction site is evidence of the huge interest in the technology,” said Kristina Zimmermann, Dena expert for Energiesprong.  Kristina continued, “The fact that the first Energiesprong project in Germany can now be visited shows that it is working; this is what the housing industry has been waiting for”.

In order for residential buildings in Germany to become climate-neutral by 2050 at the latest, the current housing stock, in particular, needs to be renovated in terms of energy efficiency. 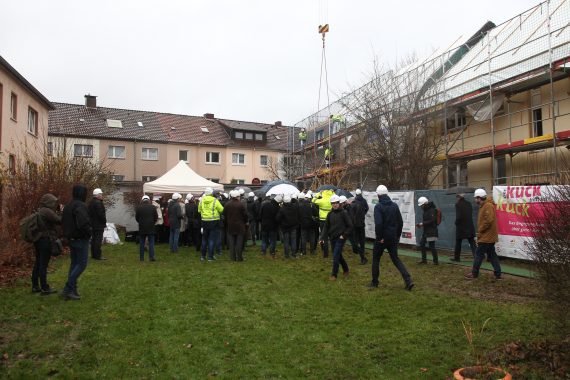