The consortium Nieuw Utrechts Peil has won the prize for best Dutch retrofit project.  The winning Flat for the Future is a social housing net zero-energy apartment building in Utrecht. It is one of the first of its kind in the Netherlands.

The Green Solutions Award is organised by Construction21 to showcase innovative buildings, districts and infrastructures from across the world that contribute towards achieving the climate goals. A total of 37 countries participated in this competition with a total of 192 projects. 22 sustainable projects were awarded prizes.

The Green Solutions Award is special in that it is both a national and an international competition. The first phase took place in every country hosting a Construction21 platform, resulting in around fifty champions being selected by the juries of experts and website visitors. With this victory came another one: the national winners also became international finalists.

The Dutch consortium ‘Nieuw Utrechts Peil’ won the national prize having delivered the best Dutch retrofit project and, on top of that, gained a special mention in the Sustainable Renovation Grand Prize.

The international jury considered the Flat for the Future to be a: “perfect example of sustainable renovation in residential construction. The project calls for industrialised processes that reduce costs, while respecting the architecture of the original building and preserving the aesthetic cohesion of the neighbourhood. Although the exterior does not suggest it, the Flat for the Future is an ultra-modern net zero-energy building; a real ‘Tour de force’ in a region where the sun does not always shine”.

Take a look at the case study on the building.

Commissioned by the Mitros Housing Association, the concept of the Flat for the Future called ‘Keep it Simple’ will be continued with 60 net zero-energy homes and 29 gas-free A + homes to be finished in the spring of 2020.

Solutions provider, VIOS, part of the winning consortium, also participates in the Interreg NWE Mustbe0 project, implemented by Energiesprong teams in the Netherlands, France, Germany and the UK. The goal of this project is to develop a market for net zero-energy apartment buildings in North West Europe. The project aims to improve market conditions, drive technology and develop and implement retrofits for 9 demonstration apartment buildings in these countries (415 apartments).

The focus of the solutions providers, VIOS, and other suppliers in the project, is to reduce the cost, and improve the quality and desirability, of technologies used in net zero-energy retrofits. New components such as solar systems, smart facades for apartment buildings and a prototype energy module will be further developed. All to be produced off-site and quickly assembled on site.

To inspire others and to make sure knowledge is shared and used in the other North West European markets, VIOS (as a partner in the Nieuw Utrechts Peil consortium) regularly open their doors to other component suppliers and solution integrators wishing to enter the net zero-energy market. The Flat for the Future project has already received visitors from Germany and France. Even representatives from New York came to visit the flat as they were developing a project, called RetrofitNY, inspired by Energiesprong. In this way, lessons are being shared and disseminated so that net zero-energy can become a worldwide standard for housing. 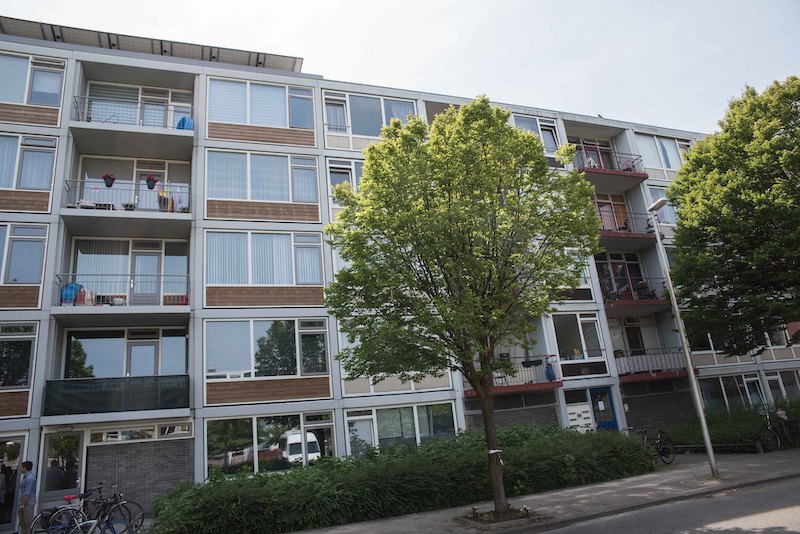 The Flat for the Future in Utrecht, The Netherlands.